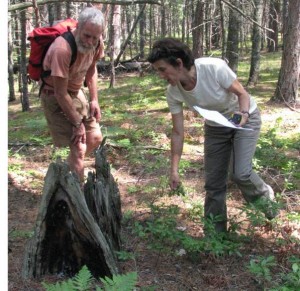 The Manierre Award, offered annually by HMWF at its annual meeting, honors William and Anne Manierre, long-time supporters of the Foundation and accomplished naturalists themselves. The award recognizes a recent, peer-reviewed publication based on work sponsored by the Huron Mt. Wildlife Foundation.

For 2015, the Award recognizes the work of Rose Marie Muzika (University of Missouri) and her colleagues for their reconstruction of fire history in several pine-dominated stands in the Huron Mts. The researchers analyzed fire scars and tree rings from 115 red pine stumps and snags to identify dates and extents of fires in seven different localities, ranging from rocky slopes to lakeshore sand-plains. Results provide a detailed story of fire as an important factor structuring forests from about 1630 to the present (the earliest fire-year identified was 1439, but the record before 1630 is simply too sparse for confident interpretation).

It is not surprising that regular fire has been a factor in these forests; red pine is closely associated with fire. However, differences among sites and changes over time offer important insights. Stands on the slopes of the granite knobs saw frequent, but small and local fires; fires on lakeshore sand-plains tended to be larger in extent and less frequent. But the most unexpected result was a dramatic increase in fire frequency, across the region, around 1750. Prior to 1750, the average ‘return interval’ overall was about 49 years; after 1750, the average interval between fires dropped to about 18.5 years (until the early 1900s, when fire suppression dramatically reduced fires. Muzika and colleagues attribute this change largely to changing human activities in the region.

The research is published in an article titled “Fire, drought, and humans in a heterogeneous Lake Superior landscape” in the Journal of Sustainable Forestry, volume 34, pages 49-70.  In addition to Muzika, the author list includes R.P. Guyette, M.C. Stambaugh, and J.M. Marschall.