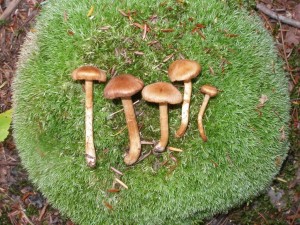 Cortinarius huronensis, an uncommon species and one of several named after the Huron Mts., was recorded by Dana Richter in his 2014 surveys of fungi in red pine forests. (photo by D. Richter)

About a decade ago I realized that the large collection of reports in the HMWF files included some pretty thorough inventories of a wide range of taxonomic groups, and had the notion that these could be the foundation for an ‘ATBI’ effort — a cataloguing of all taxa of all groups occurring within an area.

There’ve been several such initiatives for parks and natural areas, and the salient finding has been that biodiversity is so great and so poorly understood, even in comparatively well-known regions, that the task is overwhelming.  The first initiative so defined was for Costa Rica’s Guanacaste National Park.  That one has ground to a halt — other priorities were higher — but some remain active.  The Great Smoky Mountains National Park ATBI — “Discover Life in America” — has surpassed 18000 species and the end is NOT in sight.

In any case, the first version of the Huron Mt. ATBI came together in 2006 and listed about 4000 species.  It was far from complete, of course, and always will be.  Since then, we’ve updated it several times with additional records from new research and with some extensive taxonomic revisions.  The newest version was posted a couple of weeks ago, with a total tally of just over 4800 taxa, and over 400 species added since the last (2011) update.  Nearly all of the new round of additions are invertebrates, eespecially insects (with over 300 moths from a couple of 2014 projects), but there are also additions to the Kingdom Fungi.

It is unlikely that we’ll see major additions to the most visible groups — vascular plants, vertebrates, etc. — but, even there, changing environment and introductions bring new residents.  On the other hand, some significant groups are virtually undocumented. There are NO spiders listed!  I anticipate some recent projects adding substantially to our scanty list of micro-organisms.  And if you know any arachnologists you might suggest they get in touch.

The full inventory is published via this website (check the main menu bar) as one of the Huron Mt. Wildlife Foundation’s ‘Occasional Papers’ series.