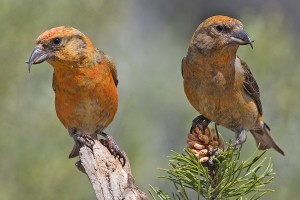 Cody Porter, a grad student at University of Wyoming, is hoping to determine the taxonomic identity of red crossbills.

Red crossbills (Loxia curvirostra) — sparrow-sized finches — are nomads.  They have no set range or territory but wander in flocks, over vast regions in search of conifer seeds.   If a flock happens on a large cone crop, they settle in and start nesting, whatever the season.   This lack of attention to calendars or geography isn’t the only odd thing about them; their upper and lower mandibles are assymetrically skewed so that their tips cross when the beak is closed (thus their common name).  This allows them to open the cones of pines and other conifers through a sort of reverse pliers effect.

Ornithologists have long realized that crossbills come in different beak-sizes, and that these sizes seem to correspond to specialization on different sorts of conifers (small beaks for tiny, light hemlock cones, large beaks for large, heavy pines, etc.), but they assumed that this was variation with a single wide-spread and variable species.  Twenty years ago, however, researchers began realizing that each crossbill is made of birds of one type, and each type has a distinctive call.  Ten call-types are known in North America, each corresponding to a distinctive beak size and shape (and specialization on a particular group of conifers).

So, are we looking at one variable species, ten species that look alike (what taxonomists sometimes call ‘cryptospecies’) but actually represent distinct gene pools (remember that calls play a large part in bird mate-choice), or something in between?  Do the different call-types have different behaviors and ranges?

Porter studies the evolutionary ecology of red crossbills, and visited the Huron Mts. recently to explore which call-types occur there.  ‘Call-type 3’ is recorded as breeding in the Hurons (based on beak shape in museum collections); it’s a specialist on western hemlock in the west, so it could make sense that it would occur in forests with abundant eastern hemlock.  However, call-type 10 is most widely documented across the U.P., particularly in jack pine forests (in the west, it specializes on Sitka spruce!).

On a  preliminary visit to the area in August, Porter got good recordings from one flock near Florence Pond.  Even though roosting in hemlock, they were call-type 10.  Do both call-types occur in the area?  Was the the call-type 3 record a misidentification?  Do call-type 10 birds feed on hemlock seeds in this area?  Are call-type 10 populations in some areas diverging from their western kin? Porter hopes to revisit the area at other seasons to clarify the situation.