Increasingly, ecological questions call for ‘big picture’ perspectives in space and time.  It’s not so much that these questions are new — they aren’t — but that new tools and approaches are making them, for the first time, rigorously addressable.  Synoptic views from satellites and air-borne sensors, techniques for analyzing ‘environmental’ DNA from soils and waters, statistical and analytical tools for working with what is trendily called ‘big data’, all help drive analysis of ecosystem dynamics, all the way up to whole-biosphere scale.  This is ‘just in time’, given the urgency of understanding effects of global, anthropogenic alteration of biosphere processes.

But there are still some recalcitrant problems in filling in important parts of this giant, infinitely complex puzzle.  Human observers are still essential for observation of individual behaviors, enumerating of populations of many types of organisms, and documentation of local biological events.  And there are not enough research scientists to do the job comprehensively.  Thus, an emerging and likely critical contribution to the big-science agenda — ‘citizen science‘.  Citizen science is the alliterative shorthand for getting the thousands of devoted and knowledgeable amateur naturalists involved in data-collection.

Citizen science isn’t new, either. For example, ornithologists have long made use of the records of amateur bird-watchers (for example, through the ‘Christmas bird count’ data archived by the Cornell Lab of Ornithology).  But now there’s a concerted push from funding agencies like NSF to make more effective use of this resource. 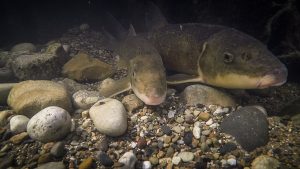 I offer all this background because I want to write about HMWF’s involvement in a new citizen-science initiative, led by Dr. Karen Murchie at the Shedd Aquarium of Chicago and aimed at developing a network of citizen observers across the Great Lakes.  The project aims to document fish migrations in Great Lakes tributary streams in order to better understand how these behaviors respond to environmental factors.  The initial target is the spring upstream spawning runs of suckers.  Suckers move upstream in large numbers in early spring in what Murchie calls a ‘rolling wave of migrations along a latitudinal gradient’. Previous work by Dr. Peter McIntyre (also supported by HMWF) shows that those movements may play an important role in transport of nutrients upstream.

Murchie’s team is training observers at sites from the southern end of Lake Michigan to U.P. tributaries of Lake Superior.  In addition to monitoring temperature sensors and water-level gauges, volunteers document presence or absence of suckers through the critical period in May and June.  At Huron Mt., staff have volunteered a few minutes of their time each day to observations at monitoring stations on Pine River and Salmon Trout River, and everything was in place in time to collect data early this year.  Murchie and collaborators hope to continue the project for at least five years, developing data that can be compared with historical records from the Huron Mts. and elsewhere.

This project has already made the news, in a front-page story in the Chicago Tribune from May 12.  More to follow…