In science, new findings often raise more questions than they answer.  That seems to be the case with recently published research on the lake trout (or lake charr) of Rush Lake, where two distinct forms of the species coexist.  The origins of this unusual scenario are ambiguous, and it may, to quote the title of the new paper, “challenge the model of lake charr evolution.” The researchers suggest that it may also be vulnerable to disruption by recent habitat changes.

As long ago as 1929, distinguished ichthyologist Carl Hubbs recognized two types of lake trout in Rush; the widespread, typical or ‘lean’ form (Salvelinus namaycush), and a distinct, deep-dwelling, smaller and tubbier version.  Hubbs believed the two forms did not interbreed and described the distinctive fo

rm as a new species, Salvelinus huronicus unique to Rush Lake.  In a 1958 book, Fishes of the Great Lakes Region, Hubbs and co-author K.F. Lagler apparently write that S. huronicus was likely extinct.  That, fortunately, turns out to be wrong; it is, so far, doing fine – but what it actually is is less clear. 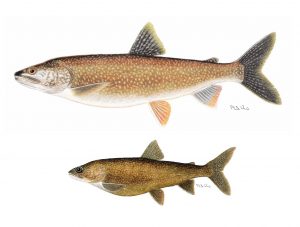 Multiple, coexisting forms of lake trout are known from a number of lakes.  In Lake Superior and Great Bear Lake there are as many as four distinct forms (the deep-water ‘siscowet’ form was once targeted by a gill-net fishery in Lake Superior).  The divergent forms appear to be associated with different feeding habits and life-histories.  But all of these other cases involve lakes much larger than Rush Lake (the smallest is Quebec’s Lake Mistassini with a surface area of 2,783 km² compared to Rush Lake’s 1.3 km²).  This is all summarized and illustrated in a recent publication in the journal  Fish and Fisheries (it’s open-access; you can see it here), authored by some of the same researchers whose work at Rush Lake is described below.

About a decade ago, Dr. Mara Zimmerman – then part of a research team at the Great Lakes Fishery Commission studying lake charr diversity – initiated research at Rush Lake to try to understand how two morphs might arise and coexist in such a small lake.  Oher researchers were drawn into the study as it expanded from initial morphometric studies of the Rush Lake fish to include acoustic and net sampling assessments of population sizes and distributions, physiological and chemical studies to understand diet and habitat relations, and genetic analyses to shed light on the evolution of the divergent forms. The new paper in the Biological Journal of the Linnean Society brings together ten authors (led by Louise Chavarie of  Michigan State University) from seven institutions to integrate the multiple facets of the study with the goals of addressing the nature of the divergent forms in Rush Lake, analyzing ecological distinctions in terms of feeding habits and distributions, assessing whether the forms are genetically distinct, and gaining insight as to their origins (did the forms diverge in situ, or did they colonize Rush Lake separately from nearby Lake Superior?).

The two Rush Lake forms are clearly distinct, both morphologically (see the image in this post) and ecologically; they exhibit distinct distributions within the lake and differ in foraging and feeding patterns; with the diet of huronicus is dominated by small invertebrates, while the ‘lean’ fish feed heavily on other fish.  The evolutionary/genetic story is striking and complex; the two Rush Lake types are genetically quite similar to one another but relatively distinct from Lake Superior populations, suggesting that they may have diverged in situ, and that their differences in appearance and behavior do not correspond to large genetic differences.  In fact, the researchers believe that the two types can and occasionally do interbreed, and their distinctness is maintained only because their very different ecological habits reinforce behavioral separation between the two potentially overlapping gene pools.

But, to quote Chavarie et al., “the question still remains as to why Rush Lake is the only known small lake that sustains multiple lake charr morphs”.  Rush is an unusually deep lake, but other small lakes of comparable depth have charr populations without multiple morphs.

Finally, the researchers note a potential fluidity to the situation. Rainbow smelt have appeared in Rush Lake only in recent years (in fact, were first detected in this study).   Both lean and huronicus forms consume smelt, and the researchers suggest that smelt invasion might “disrupt the partitioning of resources and the ecological barriers” that have maintained distinctness of the two populations by driving a general shift to a ‘fish-feeding ecology’ by huronicus and, potentially, a merging of the two gene pools.  It is not know how long the two forms of Salvelinus have coexisted, but this finding raises a question as to whether that coexistence will continue