Documentation of “reference ecosystems”  like the pristine landscape of the Huron Mts. is critical for understanding the ‘baseline’ behavior of ecological processes without the confusing effects of a history of intensive human management; without such studies, it is impossible to fully assess effects of long-term environmental changes.  However, the value of reference ecosystems is contingent on long-term monitoring.  Thus, HMWF has consistently placed a priority on enabling long-term studies. 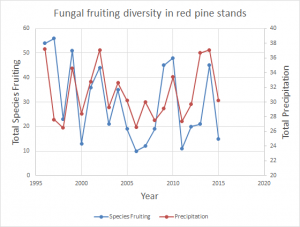 2015 marked the 20th year of one example — Dana Richter’s ongoing observations of mycorrhizal fungi (fungi that form mutualistic associations with the roots of trees) in red pine stands at Huron Mt.  Since 1996, Richter, of Michigan Technological University, has made twice-annual visits to seven sites, documenting species present as fruiting bodies (i.e., mushrooms) and their abundance. He has found, “an extremely diverse assemblage of root-associated symbiotic fungi in red pine stands,”  with a total of 107 species so far (including several rare and regionally unusual species). The importance of mycorrhizal fungi for tree growth and survival is well-established — but it is not clearly understood how the diversity of mutualistic fungal associates affects tree vigor.

Equally interesting, year-to-year variability in the diversity of fruiting fungi is huge; annual totals have varied over five-fold, from 10 in 2006 to 56 in 1997.   Visible fungal diversity tracks annual rainfall quite closely (see graph). While most of the fungi are presumably present in the soil even in years when they don’t fruit, this does suggest a strong climatic effect on fungal growth and reproduction raising questions about the effect of sustained changes in climate on this critical but often invisible part of the forest ecosystem.

Full species list for each year are available in Richter’s annual reports.