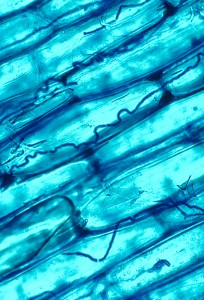 Filaments of the endophytic fungus Neotyphodium coenophialum growing in the intercellular spaces of a grass. (image by Nick Hill, from USDA-ARS: http://www.ars.usda.gov/is/graphics/photos/jul00/k8931-2.htm)

Researchers keep discovering new layers of biological diversity, so perhaps it should not be surprising to learn that there are hundreds (maybe thousands?) of species of poorly known fungi living inside the plants and lichens of the Huron Mountains.  These endophytic fungi — fungi that live within the tissues of  plants without causing any apparent ill effect on their hosts — appear to reach peak diversity in boreal regions, counter to geographic trends in most types of organisms which show increasing diversity toward the equator.

Elizabeth Arnold (University of Arizona) is a pioneer in documentation and study of these cryptic creatures.  Arnold and her team visited the Huron Mts. in 2013 as part of an NSF-funded study of endophyte diversity across the boreal forest biomes of Asia, Europe and North America.  As at other sites in Russia, Canada, Sweden, Canada, and Alaska, they  collected tissue samples of twenty species of lichens and plants typical of boreal and northern forests and, in the lab, extracted and cultured endophytes.  From pure lab isolates, DNA extracts are being used for taxonomic analysis and identification.

Arnold obtained and sequenced over 1250 pure strains from the Huron Mt. plant samples.  Initial analyses of DNA indicated that these strains belong to at least 23 orders, 40 families, and 60 genera (all in the phylum Ascomycota).  While distinguishing cultures at the species level is difficult, Arnold reports, “a minimum of 123 species … [with a] true number likely to be between 150 and 300 species.”  More precise identification is ongoing. And this is from only 20 species of host plants and lichens; currently, about 1200 species of plants (including mosses) and over 300 species of lichens are known from the Huron Mts.

There is active research on the relationships of these fungi and their host plants; there is strong suggestion that some, at least, play a significant role in defending hosts against pathogens, and some may have value in medicinal applications.  Meanwhile, it may enhance enjoyment of the visible diversity of the Huron Mt. landscape to know that each plant and lichen hosts a largely unexplored and diverse ecosystem at the cellular level.