Home Uncategorized Moonworts in the news

We have our first ‘guest blogger’. At the Foundation’s annual meeting in early August, Dr. Evelyn Williams received the Manierre Award, awarded annually in recognition of recent, peer-reviewed publication of Foundation-sponsored work at the Huron Mountains.  Evelyn is a conservation scientist at the Chicago Botanic Garden.  Her award-winning publications spring from her Ph.D. dissertation research at University of Wiconsin – Madison; links to the papers are available below and on the Manierre Award page. I invited Evelyn to write about her research for a blog post and she obliged with the following.   — Kerry Woods, usual blogger 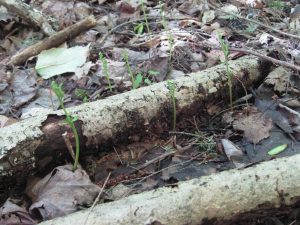 “I work on small ferns called moonworts in the genus Botrychium. Botrychium ferns don’t look like a typical fern – they have just one stalk, with simple leaves and a single stem with spore-bearing sporangia at the top. If you’ve seen one in the woods, congratulations! They are rarely bigger than 15 cm, and can go dormant underground for years.

Once you find one, you might want to identify what species you have. That’s another challenge. Common and rare species often look very similar, and with so few characters to look at, identifying species is hard. Common species also have a wide range of variation.

To better understand the ecology of moonworts, as well as to address issues of species identities and differences, colleagues and I collected multiple species of Botrychium, sequenced their DNA, and compared genetics to morphology. We wanted to answer the question: if it looks different, is it genetically different? We quickly figured out that one species, Botrychium matricariifolium (daisy-leaf moonwort), has a lot of morphological variation, but that individuals were almost genetically identical. We figured out that this is because B. matricariifolium is a hybrid between two other species.  They spring from repeated hybridizations between those species, each time between parents that looked slightly different, resulting in the wide range of forms we see today. We also tracked Botrychium populations in 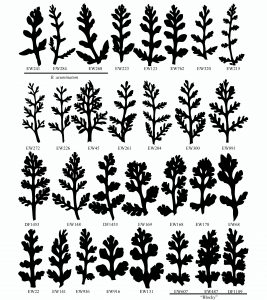 the Hurons and across the Upper Peninsula, and found that apparent population sizes change dramatically as individuals go dormant or reappear.

If you’re interested, the two most common species in the Hurons are B. matricariifolium and one of its parents, Botrychium angustisegmentum (lance-leaved moonwort). Look for them along old roads!

Our research was published in two articles. In 2015, “Tracking morphological change and demographic dynamics in ephemeral Botrychium s.s. (Ophioglossaceae) populations” written with Donald Waller appeared in the Journal of the Torrey Botanical Society, volume 142 issue 2. In 2016, “Cryptic speciation in allotetraploids: Lessons from the Botrychium matricariifolium complex” written with Donald Farrar and Don Henson appeared in the American Journal of Botany, volume 103 issue 4.

There is certainly more to learn about these odd plants, and I continue to monitor several study population of moonworts at the Huron Mountains.”