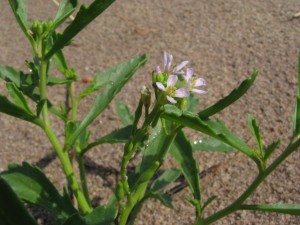 Flowers of sea rocket (Cakile edentula) on the beach at Huron Mt. (photo by Kerry Woods)

Cakile edentula — American sea rocket — is an annual or biennial plant of the mustard family, and a common colonist of beach dunes along both Atlantic and Pacific coastlines and, as variety lacustris, along most of the Great Lakes shorelines.  So it would be nothing to get excited about in many areas.  But it has been documented on Lake Superior only at a handful of locations along the south shore.

Grad student Elizabeth LaRue, of Purdue University, and her advisor, Dr. Nancy Emory, are interested in how seed dispersal mechanisms and genetics vary across the range of a species, particularly in isolated populations and near range edges.  Cakile is a good study organism for LaRue’s work since beach-dune habitats tend to be patchy and the northern interior range limit is accessible.

As it turns out, one of the northernmost known inland populations is on the beach between the Club compound and Picnic Point.  This population is well documented; specimens several decades old are in the Club herbarium.  The plant is widespread around Lake Michigan, but if there are other populations on the Lake Superior shoreline they are well to the east and southward and LaRue has yet to locate them.  The protected nature of the beach habitat here may have allowed the persistence of the population.

LaRue visited the Club in August and censused the main population (she also found a plant on Conway Beach), and collected a few seeds for analysis.  This population will be valuable in assessing her hypothesis that dispersal ability of seeds will be reduced in isolated populations where viable habitat is sparse.  A number of other questions might be pursued: If this population has persisted in isolation for a long time, does it show genetic evidence of inbreeding?  As climate warms, will it serve as a source of colonists for other areas along Lake Superior’s shores?